At Airventure, I expressed interest in the new Zenith "Donut" nose gear suspension system and Roger recently provided me with a kit to retrofit my STOL 750 so I could provide an early evaluation and testing (Zenith has been testing this in-house for a year).  This system will also be available for the Cruzer and the 601/650.  The 701 system will follow, but apparently it will need some modifications from this design.

The original bungee system works well, but it does have a single-point failure potential (the bungee!) and apparently the last few years the production process has changed and bungee failures are occurring more frequently.  In addition, the bungee is non-adjustable for pre-load and induces some torsional resistance when the nose gear rotates.

My kit arrived Friday and was very complete - the only additional material needed was some white lithium grease to lubricate the area where the donuts are located (3M silicon grease is now recommended - doesn't dry out like white lithium grease does).  A detailed drawing and step-by-step instructions were included (note correction on Page 2 about spacer above last puck).  The total weight of the installed parts was 3.5 lbs (this is with one steel collar - the second collar is removed after pre-load adjustment).  The bungee and bungee pin removed were 0.5 lbs for a net weight of 3 lbs. Here's what's in the box: 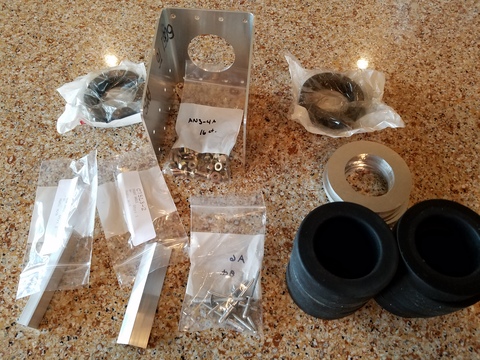 I removed the nose gear by cutting the bungee and detaching the steering rods and lower bearing.  I had the stubs that hold the bungee on the upper end of the nose gear cut off and the resultant holes welded shut. (You can modify your own nose gear, send it to Zenith for modification, or purchase a new nose gear.)  I powder coated the lower, exposed portion of the nose gear (not required, but something I had wanted to do the next time the nose gear was off!), painted the area from the steering arms up to 10" from the end of the upper gear leg, and ground and profiled the welds to provide a smooth surface. 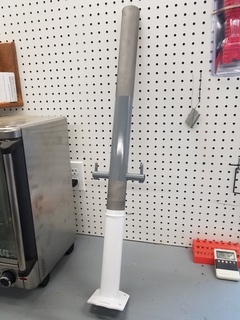 I polished the upper exposed 10" with a #80 aluminum oxide abrasive disc backed by a foam pad (so as to conform better to the curvature of the tube).  It is important to polish the tube and profile the welds so the donuts can slide smoothly. The kit includes 10 spacers and 10 rubber "donuts" or pucks that are stacked above the 2 steel shaft collars.  I found the spacers and donuts to be a tight fit, so I opened them up slightly with an oscillating spindle sander.  The sander removed very little material from the donuts, but easily opened up the spacers so they could slide on the tube without binding. The spacers and donuts are then stacked on the nose gear (start with a spacer, then a donut, and alternate, finishing with a donut).  The rubber donuts fit snugly, but will slide with a little lithium white grease for lubrication (white lithium grease was initially recommended, but now Zenith recommends 3M silicone paste grease). I then drilled and riveted the front and rear angles to the upper stop. 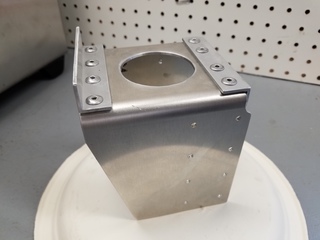 These 8 rivets were drilled out in the forward firewall gusset on each side and opened up to #12 holes with the upper stop cleco'd in place. 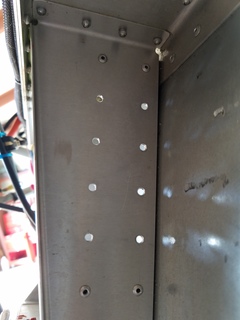 After deburring and Cortec application, the upper stop is bolted in place with 16 AN-3 bolts - heads inboard and nuts outboard. The nose gear is then reinstalled and the stack is pre-loaded by tightening the lower shaft collar, prying up the upper collar with screwdrivers on each side, and then tightening the upper collar.  I then loosened the lower collar, moved it up, and repeated the process for a total compression of between 3/8"-1/2".  Some pre-load is necessary to permit the self-centering of the nose gear in the lower bearing. 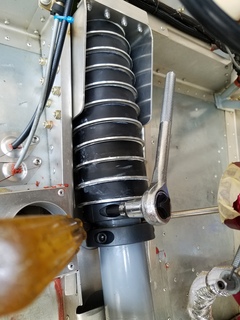 Apparently I got the pre-load about right - when the aircraft sat back down on the nose gear, the steering arms rode approximately 5-6 mm above the bearing block, allowing for easy ground steering.  As I mentioned earlier, once the pre-load is adjusted, the second steel collar can be removed. (One is sufficient and they weigh 1/2 lb each!)  Zenith will eventually have an adjustable tool to adjust the pre-load and the second collar will no longer be necessary at all. With one shaft collar, Roger recommends Loctite on the securing machine screws. 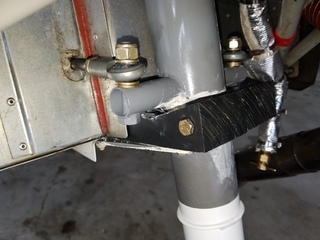 My original bungee system worked great.  It was smooth and I couldn't even detect the self-centering "notch" as I swung the rudder from one side to the other. (IMHO, most rudder smoothness problems are due to over-tensioning the cables.)  However, I was amazed at the difference after installing the new "donut" system!  The suspension feels more compliant and is quieter. Steering effort on the ground was reduced and in the air, the rudder pedals were extremely light. However, when the rudder was centered, it seemed to hold it's position well.  The best way I can explain the difference in "feel" is it is similar to the difference between manual steering and power steering - it feels like the nose gear is turning on ball bearings - there is absolutely no torsional resistance!  I always felt my finger-tip dual stick forces were much lighter than my rudder, and now they are equally light.  After flight testing and bumping along on a turf strip, I checked the bearing marks on the grease on the strut below the bearing and it appears the gear was deflecting about an inch during landing and taxi, which is fairly similar to what I saw with the bungee.

About the only negative is the additional weight over the bungee, but that's a small penalty to pay for eliminating the potential single-point failure of the bungee and eliminating regular bungee replacements.  It was a fairly easy retrofit since the Jabiru is a light engine and there is plenty of working room between the engine and firewall.  I understand Zenith is going to make this system standard with new kits.

(Disclaimer: No business or financial affiliation with Zenith Aircraft.)

Another update!  I've now flown the 750 several times since re-lubing the puck system with the 3M Silicone Paste.  As expected, the squeaks are gone and the system is once again totally silent during operation.  Hopefully, this lube will last much longer than the white lithium grease!

Since you polished the top of the tube have you had any issues with rust?

We have had the donut system for some time.  How do you lube it while assembled?  Meaning I think the donuts have quite a bit of lube on them at install but is there a way to lube it now without disassembling?

I was an early tester/adopter of the system and was told to use white lithium grease.  Later, Zenith changed their recommendation to 3M silicone grease and I cleaned and relubed mine. I loosened the steel retaining collar and slid the lowest donut down slightly to create a gap.  You can then use the brush with the 3M silicone lube to apply to the strut and inner surfaces of the donut and spacer.  Then, push the next one above down and repeat till you've lubed them all and then push stack back up and apply pre-load pressure and lock back in place.

Thank you.  Now I see in a page earlier you described this in detail.  Sorry for not looking for it.  But thanks again.  It looks pretty simple to do.

Update - I flew yesterday and noticed the nose gear was "clunking" a bit on my turf strip (TN66) as I taxied back to the hangar.  I've had the puck system for 3 years and it has always been much quieter than the old bungee system.  I pulled the cowl and discovered the steel collar had slipped slightly down the nose gear strut, releasing the pre-tension.  I had put a tab of torque check paint at the junction of the steel collar and the strut, expecting it would crack or flake off if it slipped, but the torque paint was intact and had simply slid down the strut with the collar!

Roger at Zenith had told me I could use both collars or just one collar after pre-tensioning, but to put Locktite on the screws as a precaution if only using one collar.  When I loosened the screws to re-adjust the stack, they were still firmly held in place by the Locktite, so the screws had not backed out, So, after re-tensioning the stack, I used both collars instead of just one.  Another 8 oz. of weight, but better to be safe than sorry!  Rather than use the torque check paint again, I made a reference mark 1/2" below the bottom collar and will check that on preflight to assure it doesn't slip again.

John, Do you by chance know the thickness of the new top mount for the doughnut system? I'm wanting to change mine over this winter and don't have that measurement.

Sorry, Zenith supplied a drawing with the kit but the parts are not dimensioned.

Does anyone have the dimensions of the pucks?  I know they are 3" round and 2" ID, but what about thickness?  Secondly, has anyone found a source for these or know what Shore hardness they are?