Here's a preview of our planned activities for the upcoming Open Hangar Day and Builder Fly-In Gathering.

This year we're celebrating the 20th anniversary of Zenith Aircraft Company, and this will be our 21st annual event!  Plan to join us on September 21 & 22 in Mexico, Missouri!

We're planning a Zenith Banquet dinner on Friday evening (September 21) to celebrate Zenith Aircraft Company's 20th Anniversary!  Rod Hightower, EAA's president and CEO, is scheduled to be our special guest, and we have many awesome door prizes to give away, including a Dynon "Pocket Panel" portable EFIS, courtesy of Dynon Avionics, valued at over $1,400!

As in years past, we'll be hosting a number of seminars both on Friday and Saturday at the factory.  These free seminars are for existing and new Zenith builders, owners and pilots.  Here's a summary of participants who have already confirmed they will be participating:

Below is the photo of our official "ribbon cutting" back in October 1992. 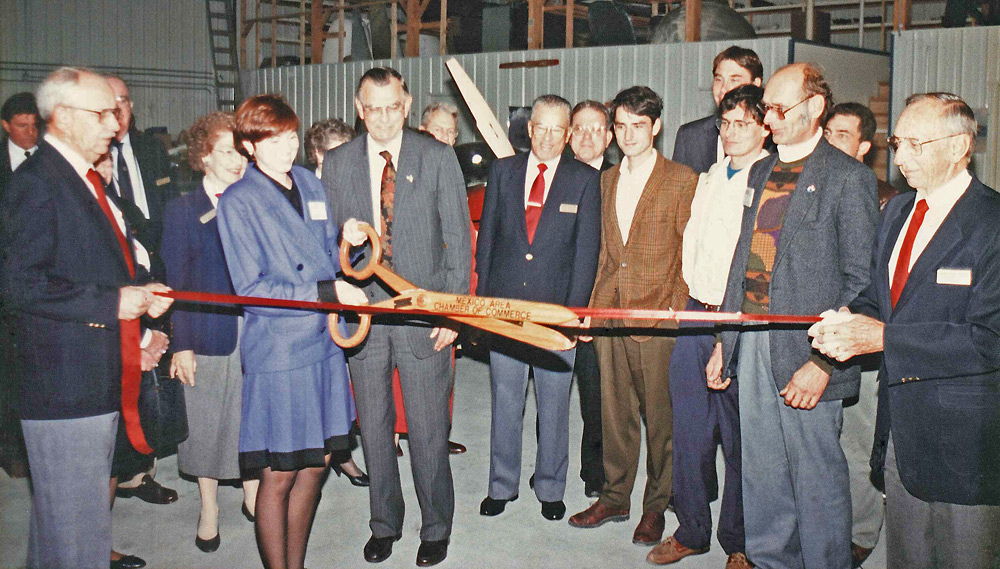 The ribbon cutting event, organized by the local Mexico Area Chamber of Commerce, was our first Open Hangar Day, held three months after our original hangar was completed at the Mexico Memorial Airport.  Above, my (then new) wife Susan cuts the ribbon with congressman Harold Volkmer.  My dad and designer, Chris Heintz, also attended the event from Canada, alongside local dignitaries and aviation enthusiasts.

We had originally planned the annual Open Hangar Days primarily for the local community: to give area residents an occasion to check out the planes that we were building at the Mexico airport.  Increasingly though, more and more folks who came out to our Open Hangar Day were Zenith customers and enthusiasts, and so we evolved the event more to Zenith builders and owners as a fly-in gathering.  A number of years ago we invited a number of our suppliers and partners to participate as well at our annual event, and we now start with seminars on Friday afternoon and a Zenith builder banquet on Friday evening.

We've also started taking an "official photo" in front of the factory with the planes and their owners:

But we've since outgrown the ramp space in front of the factory, so we no longer try to include all the planes and visitors in the official Saturday morning photo:

There are actually twelve airplanes in the above photo from our 2009 Open Hangar Day.

Following are photos from past years...  Below are a couple of photos from our 2003 Open Hangar Day:

Here are a couple more photos from our 2005 event:

Inside the factory at our 2006 Open Hangar Day:

Below, a customer demonstrates his VW-powered STOL CH 701 at the 2007 Open Hangar Day:

This year's 21th annual event is shaping up to be a great Open Hangar Day and Fly-In Gathering.  We have many participants, activities and seminars planned and I'll be summarizing activities here soon.  Once again, we'll be holding the dinner banquet on Friday evening at the Elk's Lodge next to the airport.  We invite and encourage all Zenith builders, owners, pilots, and enthusiasts to come out for a good time!  Let me know if there are any activities you'd like to see added (or repeated)...

Yes, we'd love for you to fly in to Mexico (Missouri) to spend the night!

You're welcome to camp with your plane.  The Mexico Airport (KMYJ) has an awesome new terminal building with 24 hour access to restroom, shower, and internet!  There's also a kitchen in the main terminal area

For those wanting to stay at a local hotel, the airport has a courtesy car available (and we have one too). We can always arrange a car pool if needed for local transportation.

Dave, we look forward to seeing you and your plane in Mexico!

Sebastien, thanks for the update on the agenda. What arrangements are available for pilots wishing to fly in on Friday and stay the night for the Saturday events, i.e., can we camp next to our plane and will there be restrooms open nearby perhaps in the FBO or at Zenith?