I suppose I should start posting some updates on my blog.

Last November I ordered the vertical fin.  I've been saving up for the tail kit, but I got a little impatient and wanted to practice my skills from the rudder workshop in September.  The fin is normally part of the fuselage kit, but there is no reason it can't be ordered and assembled after the rudder. 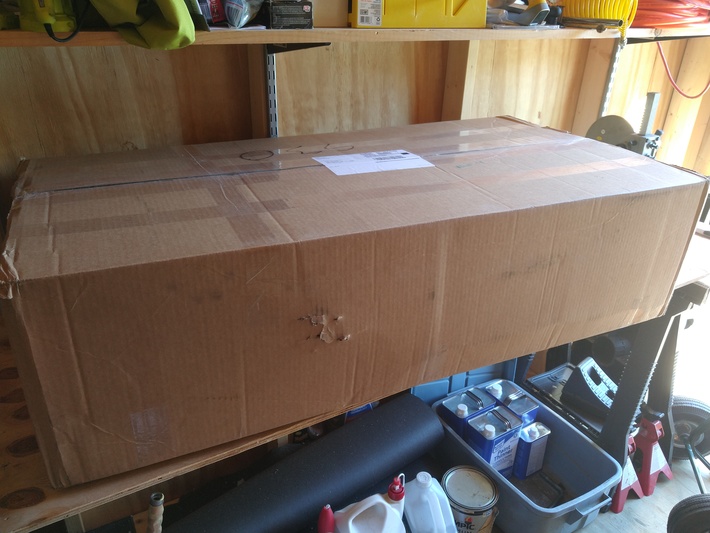 The box arrived with a little bit of damage. 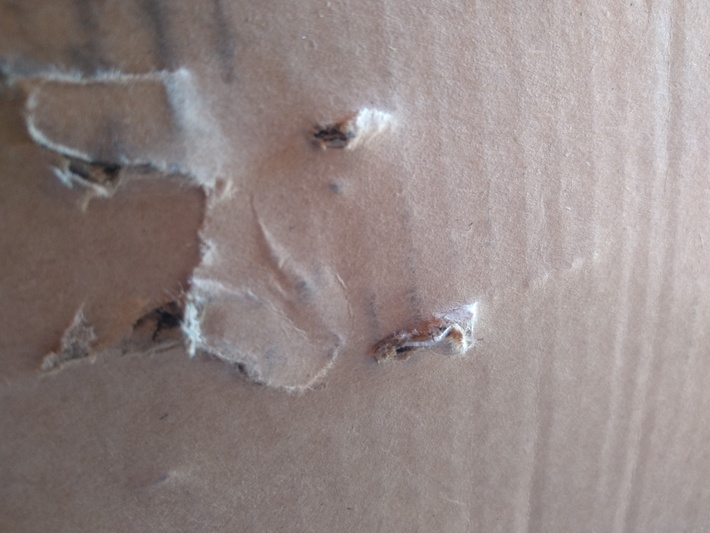 This will be the last time I have any major components shipped via UPS from Zenith.  The package was supposed to require my signature in order to take delivery.  I was working in my work shed and could see the UPS truck pull up when it arrived.  I walked to the front yard and made eye contact with the delivery driver.  He then proceeded to unceremoniously dump the box on my front porch and walk back to his truck and drive off without getting my signature.  That's when I noticed a few corners of the skin were poking out of the box.

On initial inspection I thought the skin had cracked at the corners.  When I opened the box in my workshop I realized that it was only a few scratches.  I was later able to use a small file and some sandpaper to polish them out.  It looks like whoever packed it at Zenith thought this might be an issue and put a cardboard doubler where the skin met the box.  Unfortunately, the doubler shifted in transit which led to the skin punching through. 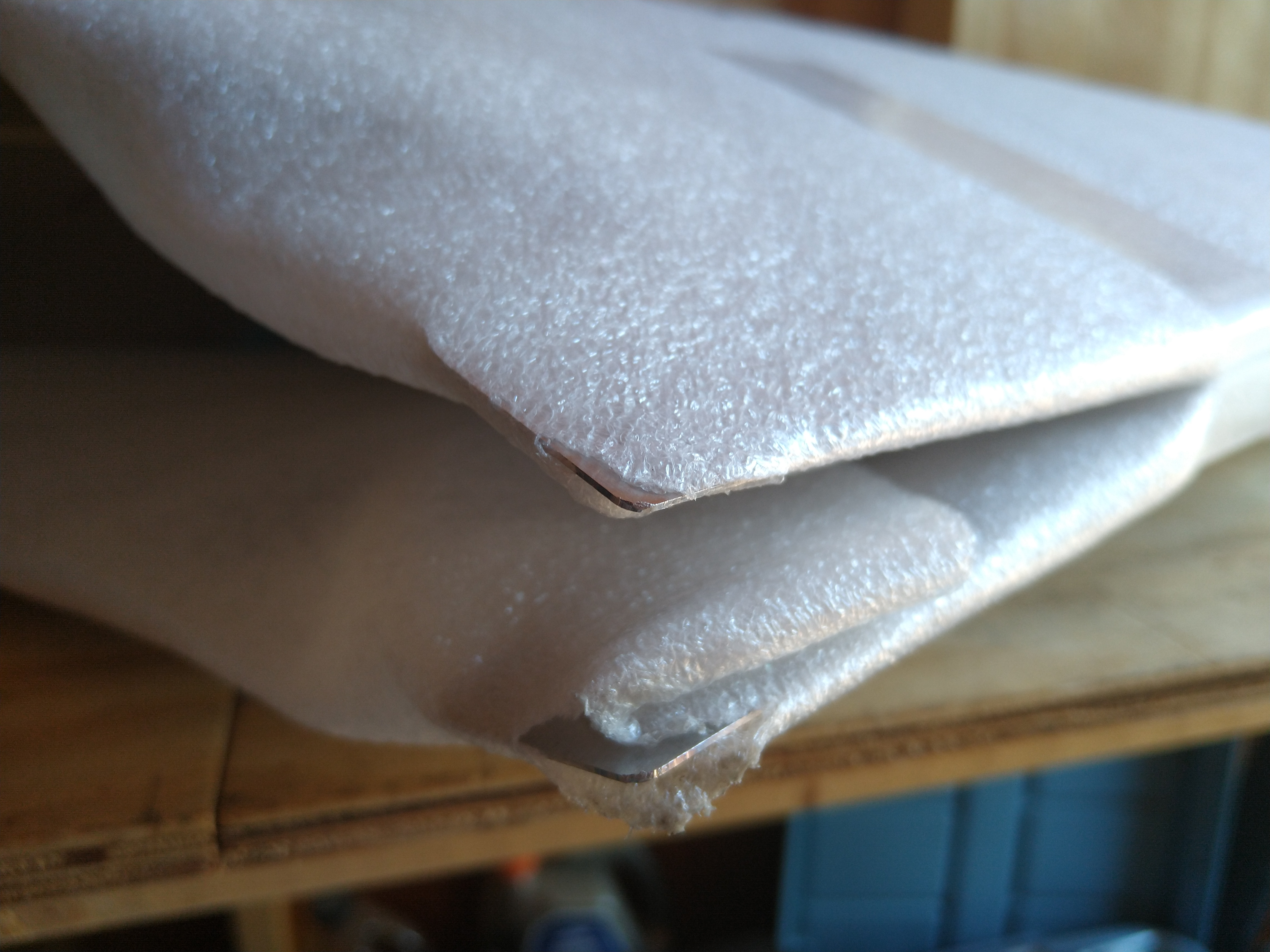 I started out by clecoing the doublers and hinge angles to the fin spar, making sure each hole was properly reamed out with a #20 drill bit, and deburred.  I also removed the hinge pin from the rudder and separated the two hinge halfs.  I noticed that the right doubler and hing angle overlapped each other when I clecoed them together.  This caused me to realize that the holes for the hinge angles didn't put the hinge half perfectly down the center of the spar.  I initially thought that this may have been some sort of an error, but decided to consult the plans before shooting off an e-mail to Roger.  That's when I noticed this part of drawing C75-RA-2: 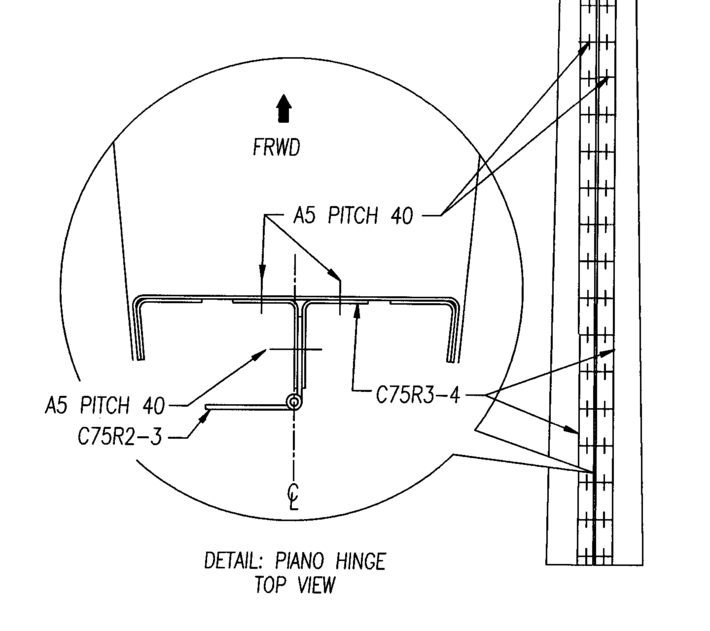 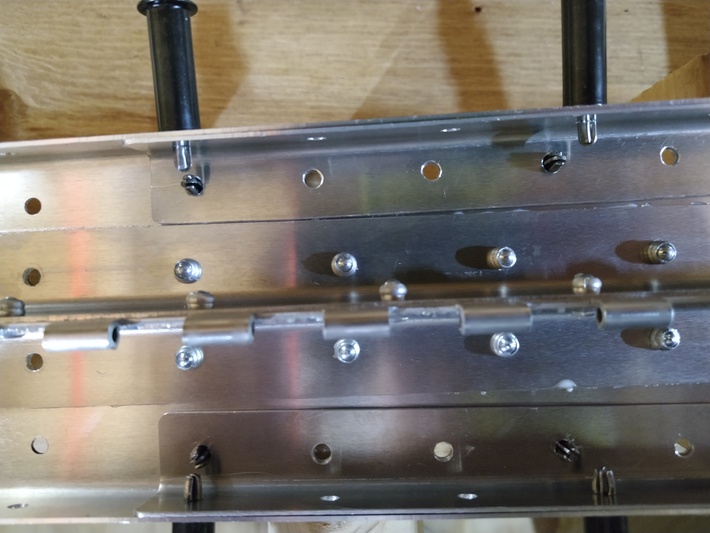 I ran into another issue when clecoing the skin to the frame.  I knew before ordering the fin that the drill holes in fin ribs were only drilled to #40 size because the instructions stated as such.  However, all of the drill holes on the skin were #30.  This made clecoing the skin to the spar, as per the instructions, very difficult.  I could only get a #30 cleco through the hole in the skin, but the cleco wouldn't latch to the spar because the hole in the spar was #20. I suppose I could have removed the skin and drilled the holes out on the bench, but since it was a bit of a chore to get the skin on in the first place, I decided to drill the holes out in place.  It took every clamp that I had, including a number of small wood clamps to clamp the skin to the spar, but I was able to do it.

I also used the #30 clecos to center the skin rivet holes over the rivet holes in the fin spar.  As I said before, they wouldn't clamp but they also wouldn't let the skin move from side to side so at least they had some utility.  I gingerly drilled the #30 holes along the spar out to #20 size.  The clecos did their job and all of the holes on the spar were perfectly circular, none were ovaled out.  I could now properly cleco the skin to the spar.  I then drilled out the holes on the ribs from #40 to #30 and clecoed every hole as per the instructions. 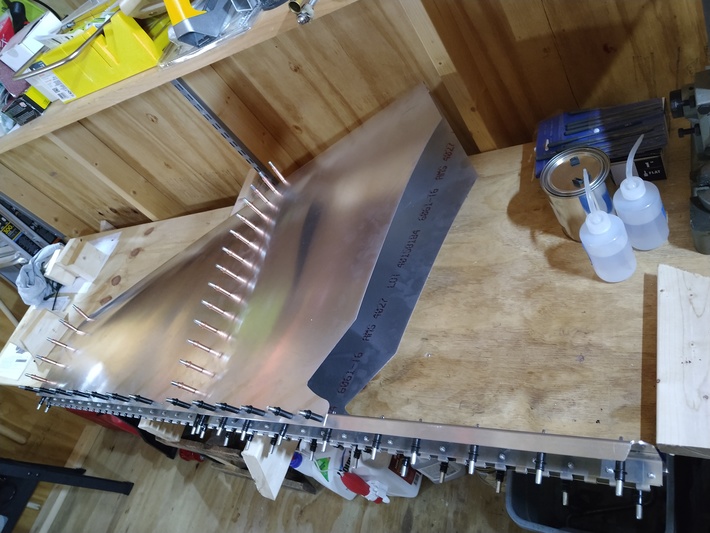 I then removed the skin so I could deburr all of the holes, apply Cortec to the doublers and the ribs where they touch the spar, and then rivet them all together.  I've taken to using a combination Sharpie marks and spare clecos make sure I don't rivet something before it's ready.  A lesson I learned the hard way at the rudder workshop.  The rivet holes connecting the ribs to the spar were a little tight so I had to use the hand riveter for those.  It worked well, I can't tell the difference between the ones I hand pulled and the ones that were pulled by the rivet gun. I had already deburred all the holes on the skin, so next up was applying Cortec as I wrestled the skin back on the and clecoed it in.  The thing I like about pulled rivets over solid rivets is that when it's time to rivet you can start to relax a little bit (but not so much that you drop the rivet gun on the part) and get into a riveting rhythm because the hard work is over.  With solid rivets the hard work has just begun. 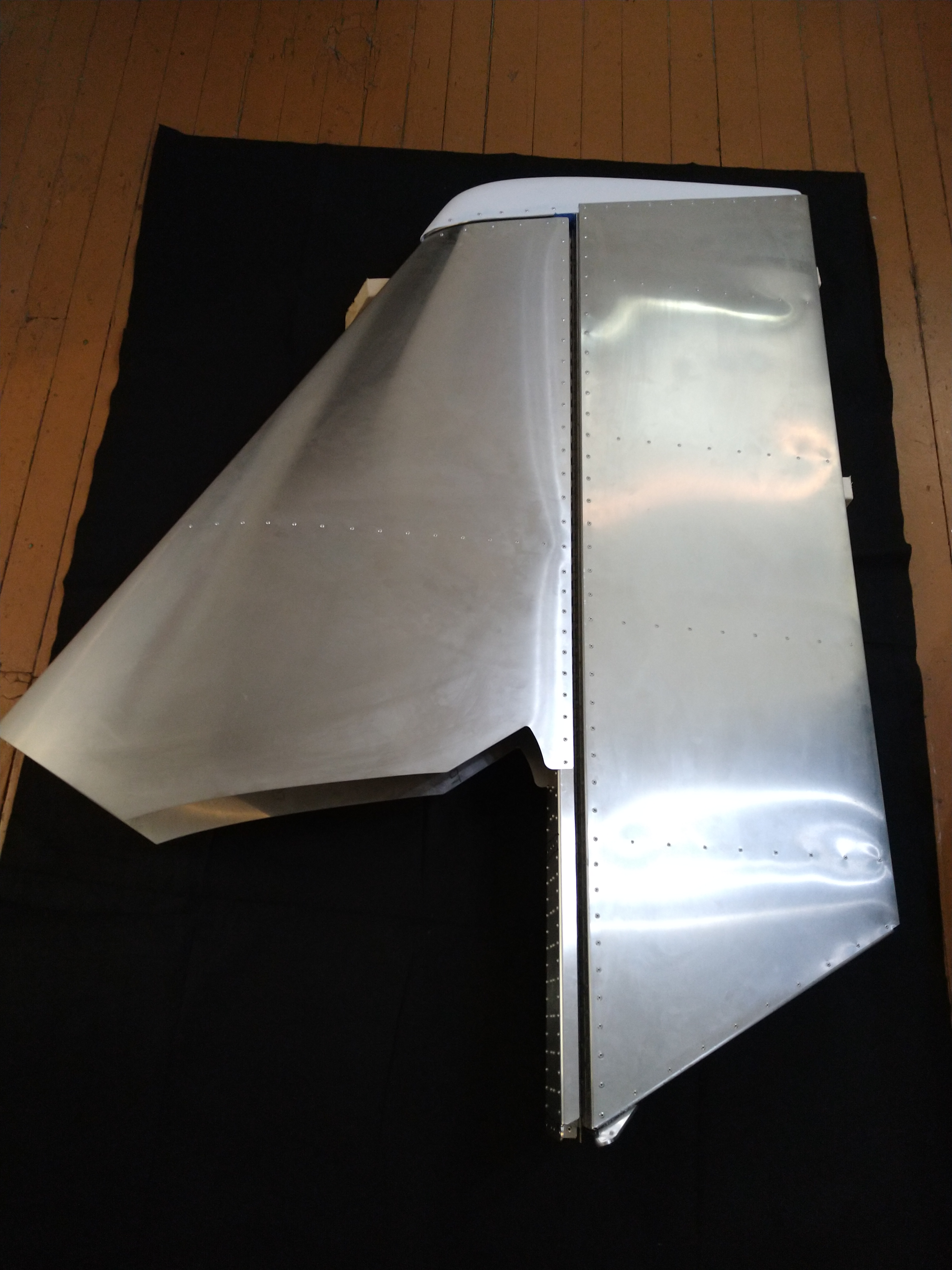 With the fin complete I installed it on to the rudder.  I used a flat tip screw driver as a lever and the edge of the rudder horn just above the hinge as a fulcrum to very carefully push the hinge pin out enough that I could pull it from the bottom.  I used some soft jaw pliers (channellocks with rubber covers, commonly used by plumbers) to pull it out the rest of the way.  I put this information out there because for some reason exact information on how to remove the hinge pin is not published anywhere.  Even John Croke's video from HomebuiltHelp.com didn't mention it.  Which is odd, because he almost never leaves a detail out like that.  The only thing you see in the fuselage video is him pulling it out by hand with zero effort.  My hinge pin required a bit more than zero effort.  Not enough to bend metal, but it's a fair amount of force.  Also, assembling the rudder to the fin is a two-person job.  The rudder and fin spars won't 100% align right.  We're talking like a half a degree off, but it does require a little bit of soft wrestling to keep the two parts lined perfectly straight to get the hinge pin to re-insert smoothly all the way. 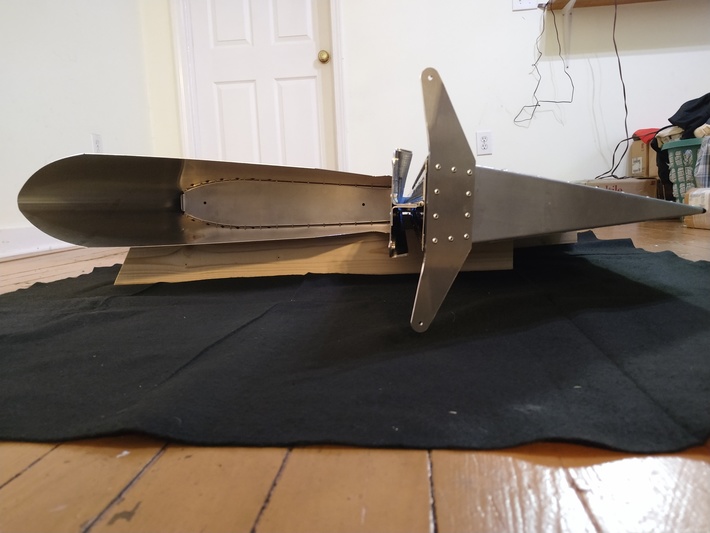 Once installed it swings freely in both directions.  I used a protractor to get a rough check of how far it will deflect.  25 degrees in both directions, which exceeds the 20 degree minimum in the plans by a comfortable margin.  Also, the gap between the vertical fin and the horn is 5.1 millimeters at its narrowest, which is just within tolerances.