Seems like over the last couple of years or so I've been starting to notice more discomfort on long cross-countries.  My STOL 750's seats have always been very comfortable - they have 3 layers of soft, medium, and firm temperature-sensitive foam ("Confor Foam"), but now I seem to have a couple of pressure points over the hip joints that I previously didn't have.  My weight hasn't changed, so perhaps a bit of arthritis? has made the joints more sensitve - who knows!?

In looking at the ergonomics of my seating position, due to the 750's flat floor and the relatively low seating height, my thighs are above the front edge of my seat cushion, so this transfers all my weight to the very back of the cushion, increasing the pressure on the areas where my hips rest.  I reasoned that providing some support to the upper thighs will take some of the weight and pressure off the hips and that a seat cushion extender for the legs, similar to what many autos now have, would increase my comfort.

Complicating all this is that I have dual sticks and I would need a cut-out in the cushion for the stick.  I found a cushion on Amazon with a cut-out for coccyx ("tail bone") pain relief that looked like the cut-out would be perfect for the stick.  Also, these cushions are typically thicker in the rear, but I need the thickness in the front so as to support my legs.  So, turning one of these cushions 180 degrees would put the cut-out and thickness where I needed it!

I cut off the end of the cushion aft of the cut-out so the reversed cushion would fit between the stick and the front of my seat cushion and also narrowed the cushion approximately 1" to better fit the seat pan and not obstruct the door latches and rods.  (I found my band saw worked great for cutting the foam.)   I trimmed the cut-off piece to the same width and then glued the narrowed cut-out portions to the underlying wedge of foam I had just trimmed off (This wedges the front part of the cushion upward for better thigh support).  I put the foam back into its inner cover and tucked the excess cover underneath, and then stuffed the entire assembly back into the original gray velour outer cover.  I also lined the top of the cushion with a layer of upholstery padding material that I happened to have on-hand to further smooth out the top of the cushion.  Obviously, since the cushion had been shortened, this left a flap of excess material which I tucked under the front of my original seat cushion.  I'm going to leave this as-is for now and assess the comfort, but it seems "just right!"  The cushion looks like this: 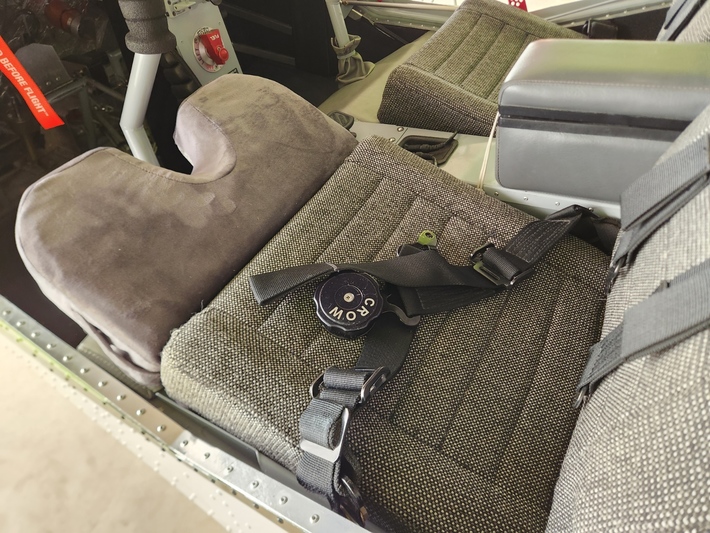 If I really am pleased with the results after a few long flights, I may see if my local custom upholsterer who did the seats can either recover this cushion with the same fabric as the seats, if available, or perhaps make a gray vinyl foam-padded cover similar to the cover and boot over my stick assembly and the gray vinyl on my center console arm rest.  If someone had similar discomfort and the Y-stick configuration, then fabbing-up something similar would be even easier since no stick cut-out is necessary!

It does restrict ingress-egress a bit, but fortunately I have good mobility and since I'm used to the stick's position, it's no big deal for me.

Hi John,  I see that you airplane was first certificated about 20 years ago.  Are the seats this old.  If so, that is probably the problem.  I found that ComforFoam started to settle after 9 or 10 years in my RV-6.  I kept adding firm foam underneath the seats until I finally gave up and made new seat cushions.  Life of memory foams seems to be about 10 years.

No, your off about 10 years! The airworthiness and first flight was in 2012! But, it's definitely 10 year old foam!

My labor rates are astronomical! LOL!

Hey John, this is Larry Tramel just wondering if you will be around your house about 10: or 11: tomorrow I would like to look at your plane if they fits your timeframe.  Are you eastern time? I would like to have your address for my gps. thanks

Sending you a P.M. 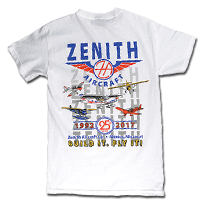